Posts for the month of January 2011

A few years back I made a box to control the relays from a parallel port. This is used at work to control as many as eight lights that indicate the status of various builds.

I wanted my own to play with the same setup at home, so I made another one. (read: Phone-controlled Christmas lights?) 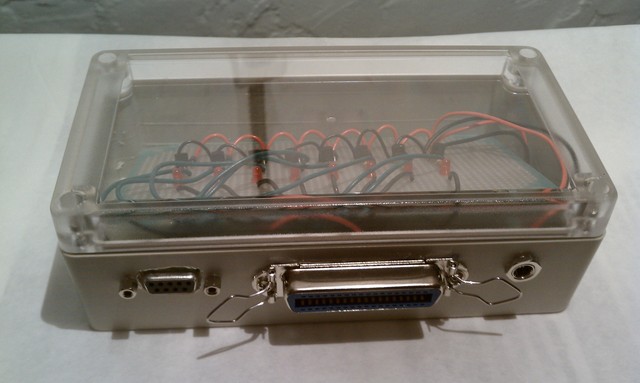 It's just eight transistors, resistors, LEDs, and diodes with the necessary connectors in a little box.

It went a lot faster this time. I did all of the soldering and most of the customization of the project box in one night. I think the previous time it took me the better part of a day.

The only thing that prevented it from working the first time I tried it out was that the Centronics connector pinout I was relying on labelled more pins as ground than were actually connected to anything. I moved the ground wire to a different pin and it worked perfectly.

I couldn't find the right kind of Centronics connector, so I ended up soldering to a connector that was supposed to be PCB-mounted. It's ugly, but it's safely tucked away inside the box and works fine.

And finally, when I just about had it ready to test, I realized I didn't have a printer cable. Fortunately, ​AIT computers provided me with this annoyingly somewhat hard to find cable for a perfectly reasonable price.

In other news, the Python ​parallel library is about as nice and simple as it gets:

Now I need to find something to do with a box of switches and buttons.

I thought it would be entertaining to make a storefront for app stores. I figure there should be an app store store where users can purchase, rate, and comment on app stores. I just spent a few minutes collecting icons and links to web pages for a handful of app stores, and I am stopping there for now, because I'm so disgusted.

Anyway, feel free to browse our fine selection of app stores below:

This just in: ​Wikipedia to the rescue.