Lake Lonely was rendered poorly named by ​the Canadian tools programmer / ukuleleist following me around in a canoe.

We launched from a boat launch at the intersection of Crescent Avenue and Poe Road, each paying $5 for access and being warned that they close at 5:30pm. Anton considered enough to ask what happens if we don't make it back in time, and the attendant / owner was basically speechless, much to my amusement, before he finally came up with something about towing vehicles.

We took a spin around the lake, admiring some of the gigantic houses as well as the deteriorating shacks along the eastern side. Exploring some of the streams on the northern side, we found ourselves in the middle of the nearby golf course, each bringing back some souvenir balls retrieved from the shallow water. Having exhausted that direction, we turned around and head down the stream toward Lake Saratoga, reaching the fork before we had to turn around. 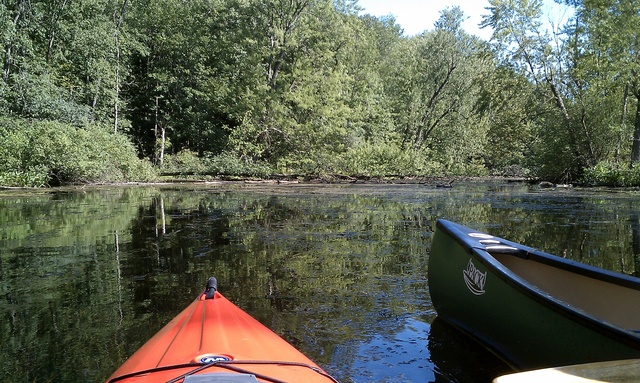