This was by far my most epic kayak adventure. First off, I couldn't decide where to go. I've found plenty of sites of people listing places around here, and I've had some success looking at maps for nice-sized lakes and then reading up on how to get to the water, but I couldn't get everything to align for this trip. And the weather reports were generally nice but predicted some rain and wind.

This was a two hour drive to an undeveloped lake in Vermont. The driving was about an hour not on highways but on 40-55mph roads, half an hour through villages, and then half an hour on a dirt road that I wanted to be rallying on the entire time.

The "caravan menace" was in full swing:

All I can say is that this place was beautiful. 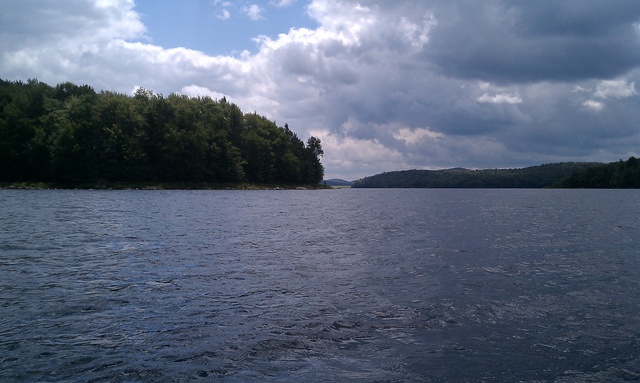 I mean, really beautiful. The only signs of civilization I saw the entire time were the cleared ski slopes of Mt. Snow off in the distance, which guided me back to my starting point, a dam by the boat launch, and just a few other people in small fishing boats, canoes, and kayaks.

In the end, the weather worked out perfectly. It was about overcast about 50% of the time and sunny the rest. The wind was gently against me half the time and then helped carry me back to where I started. I had some trouble getting water out of my kayak as I turned around at the far end, but I managed. I need to read up on how to do this right in the future.

As excellent as this trip was, I'll probably tone things down in the future. I wasn't ready for the workout I got, not that it was bad to get it. The rest of the kayakers all stayed in the southern half of the lake from what I saw. I saw some rowboats paddling around near the far end, but I suspect they got out there with motors. Though maybe I'll see a loon next time?