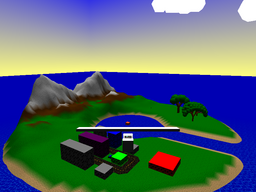 This flight simulator takes plane around Cory Island, a C-shaped piece of land named after its creator and containing everything he could fit on it in a reasonable amount of time.

The island is formed by combining several mathematical functions with the midpoint subdivision algorithm to create its very specific shape while containing randomly-generated mountains on a single heightmap. First, the midpoint subdivision algorithm is performed on the left (looking at it as a C) half of it. This is then tapered linearly down to the right half so that there are no cliffs immediately adjacent to the flat part. The distance to a circle of the desired size of the C is calculated at each point in the heightmap, and it is raised up if it is determined to be on the C or clamped to zero if it is not. It is slightly tapered if it is near the edge. Finally, a small opening is cut out to make the "O" into a "C," again, tapering it to make a smooth beach. This is the final form of the C.

Surface normals are then estimated for each grid square on the height map, and then these are averaged for each vertex, producing a smooth set of normals to be used for lighting calculations.