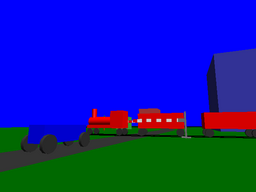 This outdoor scene involves a train going around in a loop, a car that can be driven around, and buildings and trees to fill in the landscape.

Initially, you can walk around the scene on foot. However, it is also possible to hop in the car for a ride and also to catch the train as it goes by.

The train, tracks, and road are produced by splines and a little math. The viewer bobs around as if walking when on foot.

Compiled in Linux with: