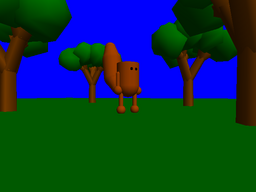 RPI is plagued by squirrels, so I saw it fit to contribute my own.

This project is a third person view of a squirrel that can "scamper" around outside in between the trees. Its tail moves around a lot sort of like a real squirrel's.

Note: I'm more interested in the math and physics than the art in this type of project. Can you tell?

Compiled in Linux with